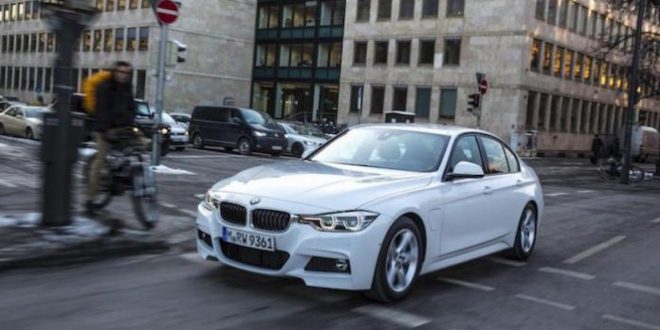 BMW plans to fight back against the Audi A4, Jaguar XE and Mercedes C-Class by introducing a hi-tech 3 Series within the next 18 months – and the compact exec is set to get an all-electric version during its lifetime.

The next 3 Series, previewed in our exclusive images, will make use of carbon-fibre construction technology and a new range of three, four and six-cylinder engines to trump the likes of the A4 and XE on CO2 emissions. But the manufacturer is also planning to take on the forthcoming Tesla Model 3 by offering not only a plug-in hybrid version of the car, but also a fully electric edition.

The next-generation 3 Series, codenamed G20, gets a switch of chassis technology as the car leaves its existing platform and moves to an all-new architecture called CLAR, for Cluster Architecture. CLAR brought in carbon-fibre construction techniques to the 7 Series when it was introduced on that car earlier this year, and elements will be retained on the limousine’s smaller brother.

Achieving this integration into a car produced in significantly greater numbers has been a big challenge for BMW engineers. The lighter components, likely to be focused around the bodyshell pillars, door frames and the transmission tunnel, will help the 3 Series to shed some weight – perhaps as much as 80kg, and enough to make it the lightest car in the small executive class.

This, in turn, will allow BMW to focus on improving the car’s handling agility – a key factor against both the XE and Alfa Romeo’s much-hyped Giulia – as well as using more downsized engines. Expect the range to start with 1.5-litre three-cylinder petrol power, which is, in effect, the same 136bhp unit used by the current 318i.

There will also be a three-cylinder 1.6-litre diesel with 114bhp, although the heart of the line-up will be 2.0-litre diesels in a couple of states of tune. But it’s the electrification that could really push the next 3 Series clear of its opposition. BMW is working on a radical, fully electric solution as it strives to fend off competition from the forthcoming Tesla Model 3 in key markets like the US.

The CLAR platform is claimed to have been engineered with electrification in mind, and BMW’s engineers are said to be working on the installation of a 90kWh battery pack, potentially giving the 3 Series EV – which is likely to carry the badge eDrive Sport – a range of around 300 miles.

The eDrive may not arrive until 2020, but there will be at least one plug-in hybrid from launch. It’s a new version of the 330e, using a development of the existing car’s 2.0-litre petrol engine set-up and an 87bhp electric motor – but with a larger battery pack to increase the electric-only range.

Inside, the 3 Series will get improved rear legroom as a result of a slight extension in the car’s wheelbase. And while the dash will look pretty familiar, it should benefit from a step up in material quality as BMW responds to Audi and Mercedes’ latest upgrades.

We’d expect the 3 Series to make its debut next autumn, perhaps at 2017’s Frankfurt Motor Show, with sales starting in early 2018.